2006-2015. Copyright of photos, art and content is retained solely by the author of this blog. Please email for re-use permission.

The Story Behind the "Forgotten Goddess"

Last fall, 2010 I did a photo shoot with a model. I normally do not do this kind of photography. In fact, I don't remember if I ever have, save for that 'portrait' assignment in my photography class in college back in the '70's.

The reason for the photo shoot was because I was invited to participate in a group show called, 1X15: one model, 15 photographers. The show was slated for December, 2010 at the Matrix Fine Art Gallery in Nob Hill. I was the first of the group of photographers to schedule the photo shoot in anticipation of heading off to the Petrified Forest National Park in October for a 2 week artist in residence stay. Knowing that I had very little time once that hit to get my assignment done, I did my 'homework' early. In September, to be exact.

I was terrified to do this project as it really was way outside of my zone and perhaps above my technical ability. However, I know full well the value of pushing one's self beyond your comfort zone, since that is when true growth takes place. To reach beyond.

So, I developed my concept and my game plan, staged the area in my back yard where the photo shoot was to take place, figured out my lighting and what time of day, etc. since I only had the model for two hours and she had to drive down from Santa Fe. There was no room for futzing around!

I actually developed TWO completely different concepts. And shot both of them successfully. This is the second of the two concepts. I'm not sure if I will ever get a chance to exhibit the other concept; hope springs eternal. 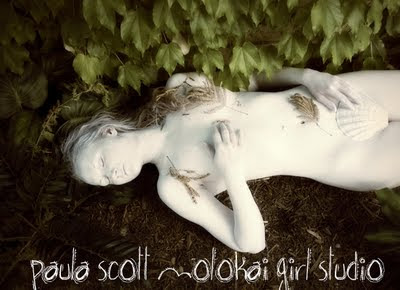 (the "Forgotten Goddess")
The inspiration for this  came from an image I saw of a statue of Venus in an Italian graveyard. Who knows how many years she had been there, fallen, hidden, and neglected.
In order to get the look I wanted, I ordered a special vegetable based white body paint and covered most of the model with this. Her hair was sprayed with white hair spray used for Halloween. I had prepared an area in my back yard especially for this scene. I was lucky that I already had the Virginia creeper vine growing up against the block wall.
With this image, I wanted to explore the notion of beauty, spirituality, neglect and decay. I drew inspiration from Botticelli's’ iconic image of Venus. One school of thought suggested that 15th century viewers of the “Birth of Venus” would have looked at the painting and would feel more closely connected to the realm of divine love. But, in the end, it doesn’t seem to matter how beautiful or how famous any particular thing is. For we, as human beings soon forget once it is out of our sight.
After all the frantic planning and scheduling involved with the photo shoot, in the last few weeks of November, it was announced that the show would be postponed and re-scheduled to take place in December 2011 at the Matrix Gallery in Nob Hill.
And, you would think that I was off the hook and able to cruise since I got my 'homework' done early, right? Wrong. This particular model became too ill  to be able to anticipate when she would be well enough for the other photographers to do their photo shoot-she has an auto immune disease of the thyroid called Hashimoto's Disease. It can be quite debilitating when it acts up. So, another model was found and I will have to re-do my photo shoot with the new model. And, of course, I have no inclination to use the same concept. I have developed an entirely new concept that is nothing like this one. To date, I am still constructing the outfit that she will be wearing.
Now you know the story behind this image. I also hope that I've peaked your interest for the image that will be presented at the December show at the Matrix Fine Art Gallery. As my friend, Loiuse Martin would say, "Stay tuned. Film at 11."
Posted by Paula Scott Molokai Girl Studio at 10:28 PM